Then it came to my turn. So I set up my montage on the easel (with two people holding on to it!) and started from the beginning. I explained what and why I added to it each day and then… I finished by telling them all about an email I had from the boss of Craftspace who I had forwarded my task blog to.
“So basically I’m going to be on the BBC Radio 4 on Easter Monday on Women’s Hour. Hell yeah!” I said as I took my seat and thanked Sam for giving me the task.

Here are some pictures from when I was interviewed. You can listen to it here: http://www.bbc.co.uk/programmes/b05plght 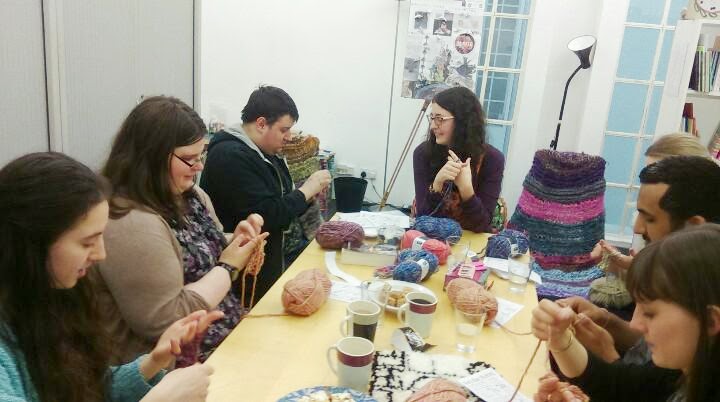 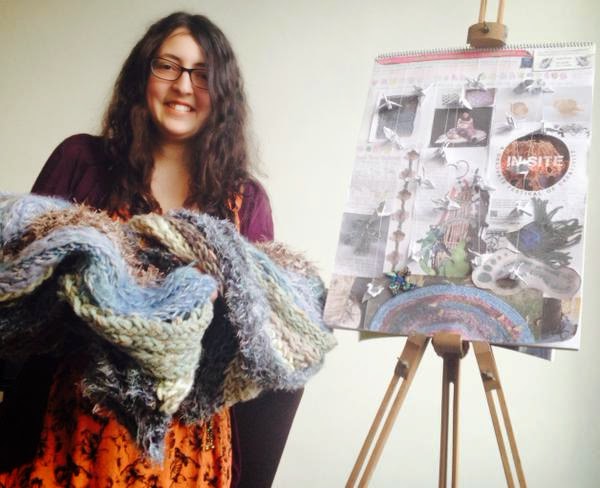 Posted by Sarah Fowler at 03:48 No comments:

Task Set: Tues 24/02/15
Notes from the task Sam Newton set me:
A3+ Week-3 weeks. Any form. Everyday fill with one thing which makes me proud, inspires, to do with Craft. Memories, don't think too much.
Ok I realise these are terribly notes, but I had just spent the day in London, part of which I had to register 20 students (hence the paper cranes). I felt proud I had got them to London and back and helped organise the trip! I was also in a state of shock to learn Sam had picked me and hear him say all those nice things about me...
Made 20 paper cranes- I was going to give a crane to each student when registering!
Week 1:
Weds 25/02/15
Attached to A2 sheet in sketchbook on an easel at the foot of my bed. A2 necessary to fit all those cranes on! 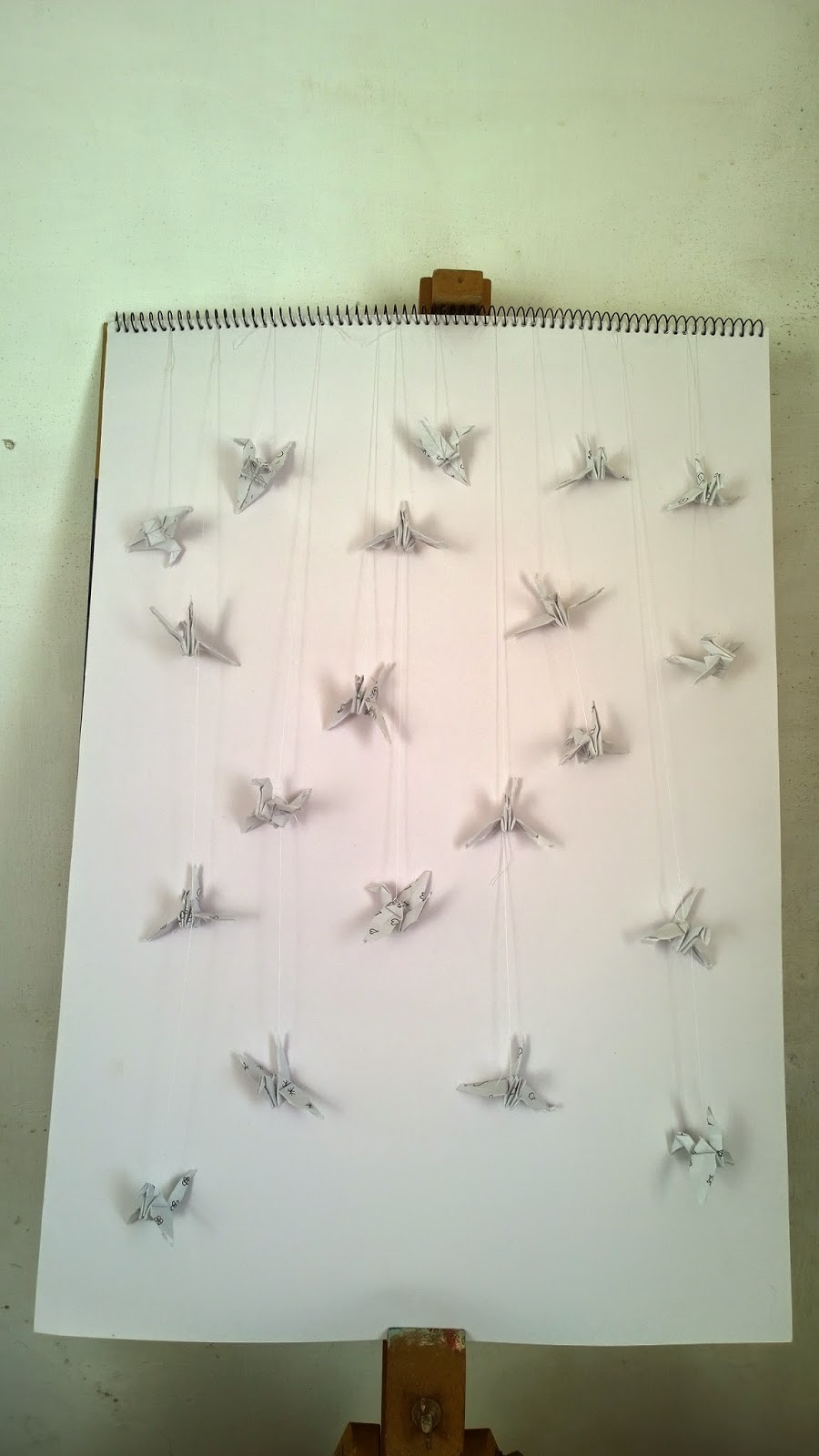 Thurs 26/02/15
Positioned finger knitting. I was proud of this as this is what I did for my first and only (so far!) commission Insite for Craftspace who I volunteered with in their collective. 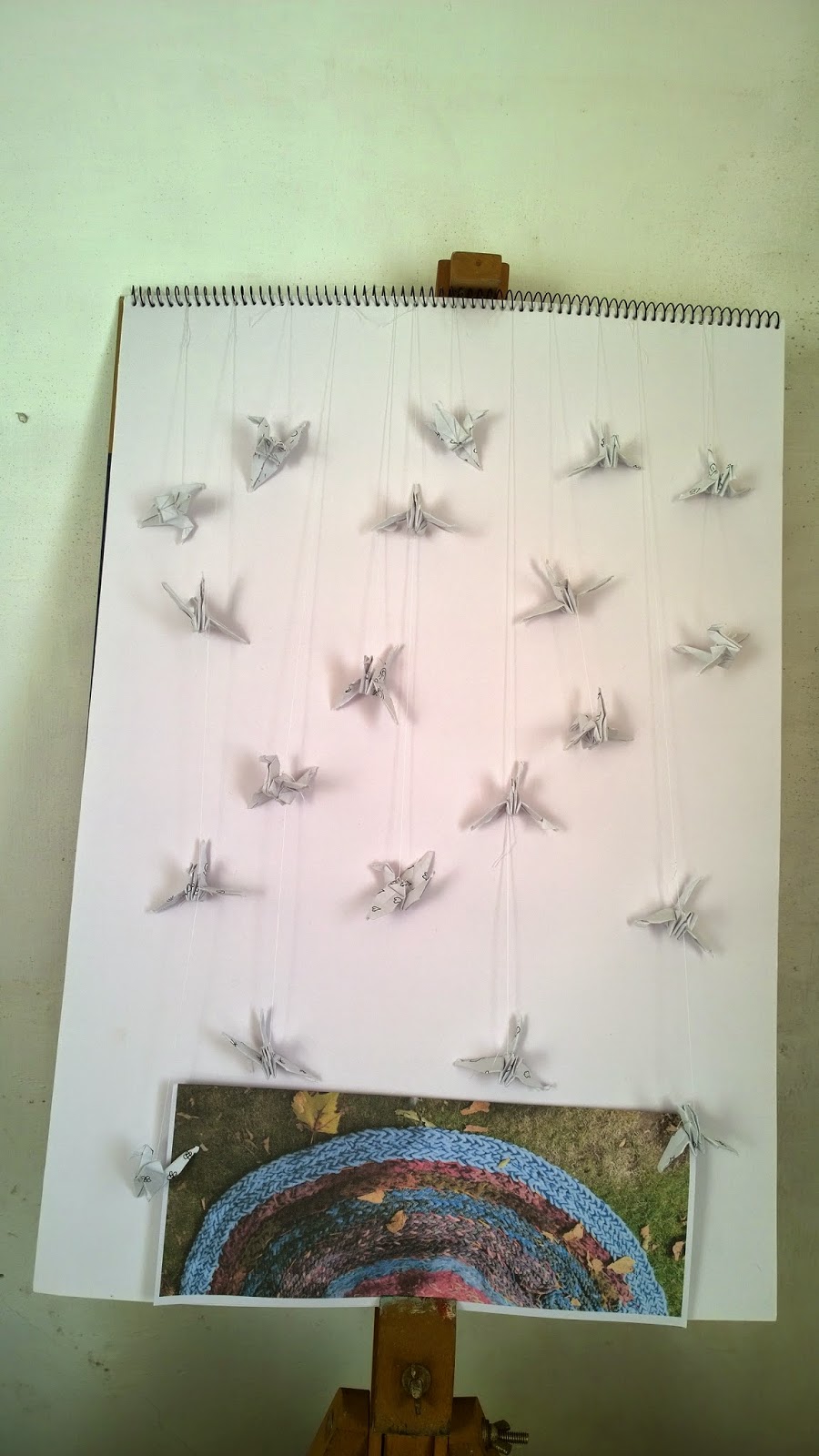 Fri 27/02/15
Not feeling well so I just attached my contact card! The card has my website on which features my degree work and current work. You can see the shadows of the cranes. 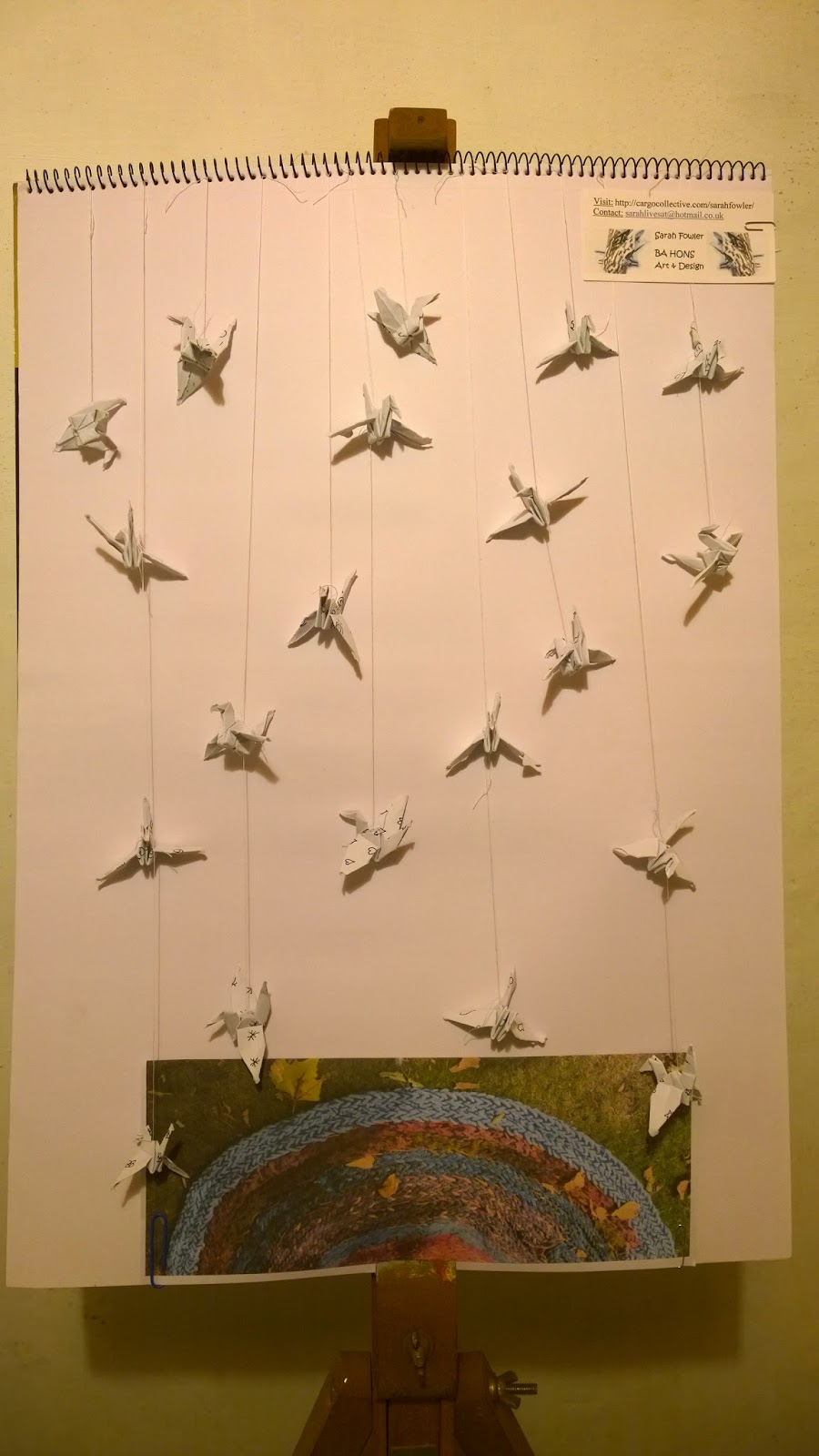 Sat 28/02/15
Really not feeling well so will have to wait and see. Was going through photo archives, bit undecided but want to keep it current. I found a major degree blunder. I had washed the gold leaf off a cast I did which was a mistake but I've only just realised. I'm not sure my course was the most nurturing for Craft especially after seeing photos of piled up looms and spinning wheels. Anyway here is said blunter:

-not going on montage though as I'm certainly not proud! I had something in mind but it printed badly so will try again tomorrow.
I ended up attaching this Craftspace Collective ribbon just before midnight! 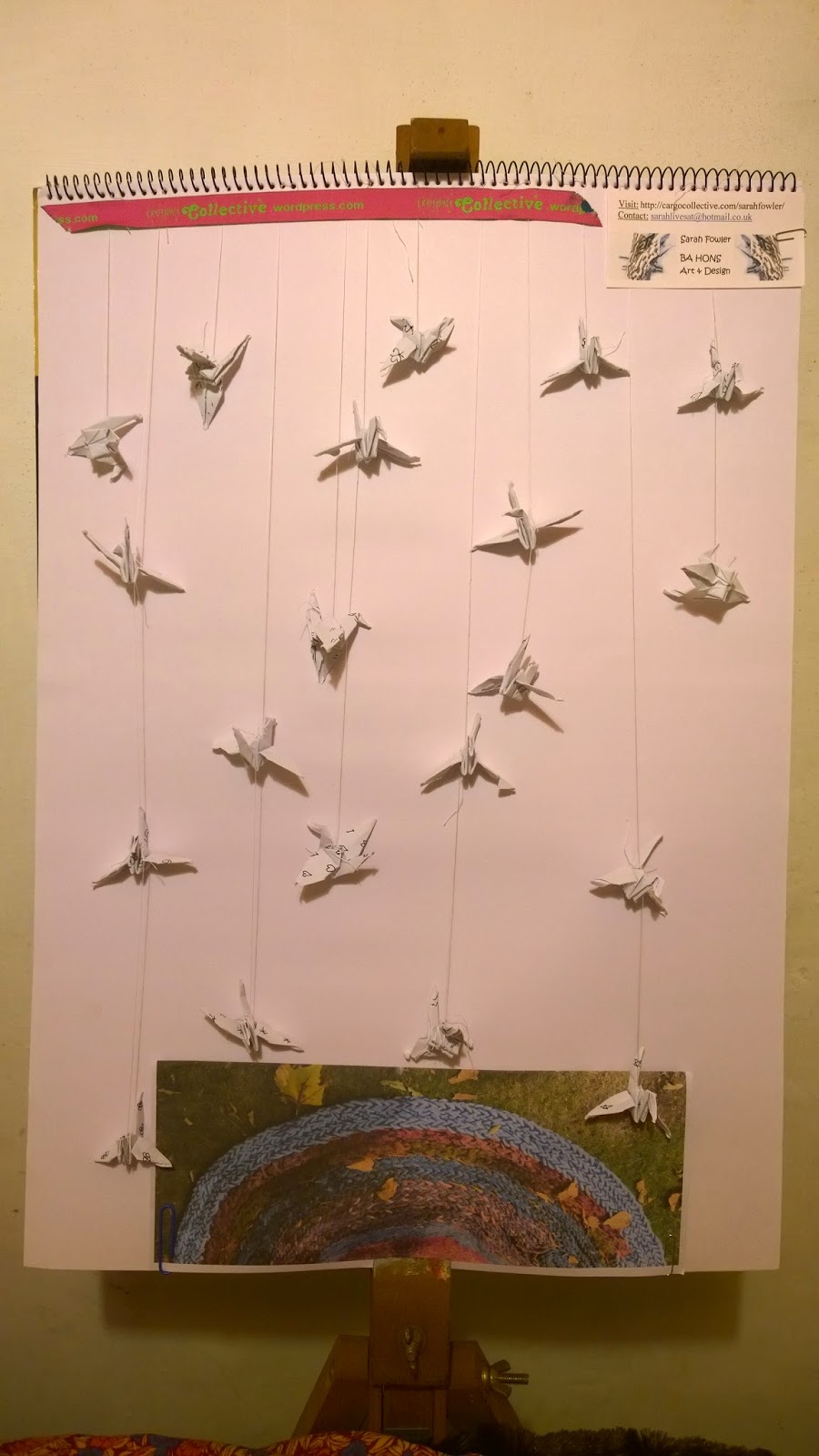 Sun 01/03/15
I wrote down the Craftspace projects/ events I have been involved with, added on my sister's quilled tree I taught her in Craft Club as well as my recent embroidered footprints I did in a session with Craftivist Artist Sarah Corbett of the Craftivist Collective. Also included my Silver Arts Award. 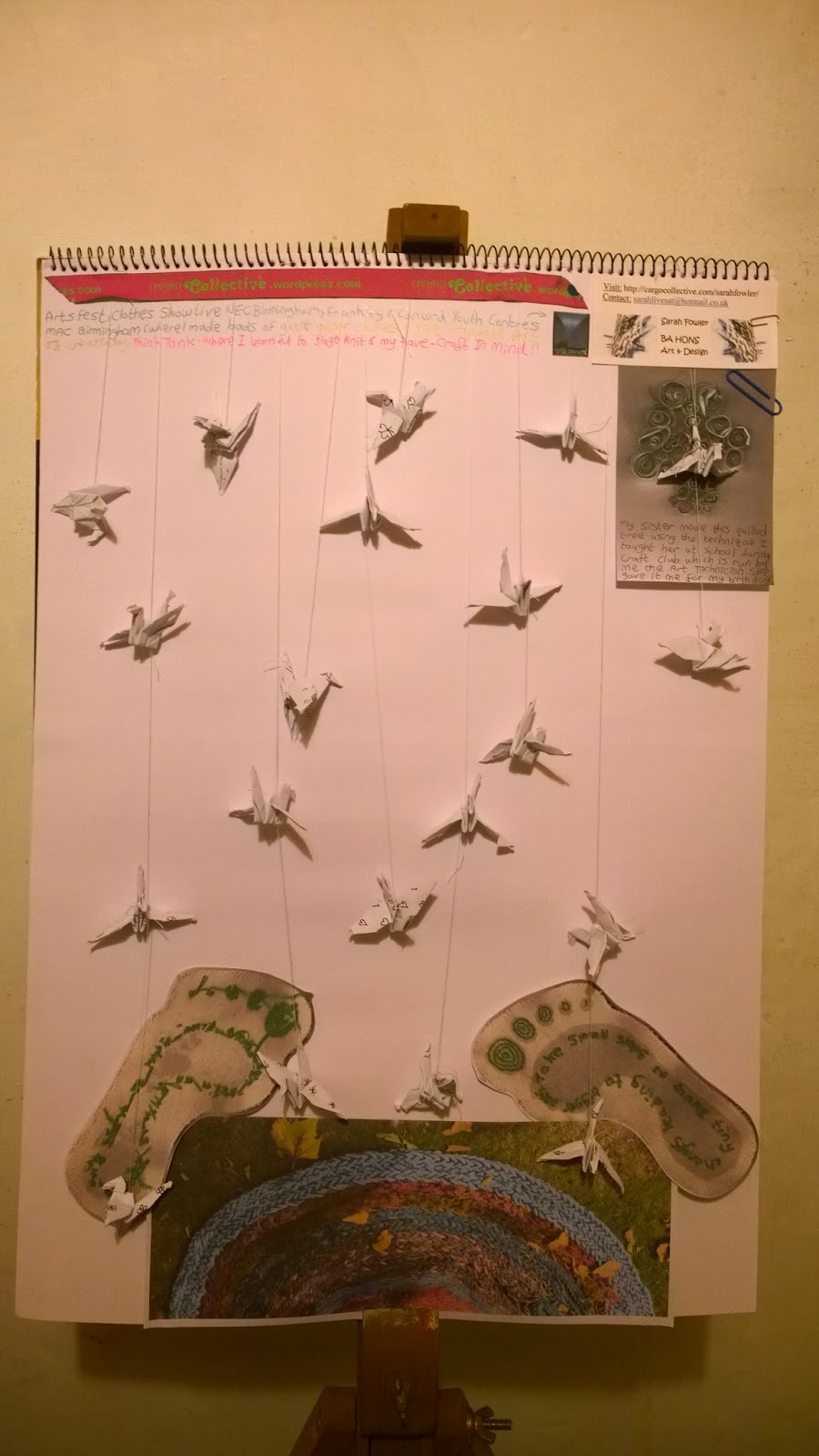 Mon 02/03/15
I was trying to find something and found a printout to In-site instead which is still in the Art Dpt at work. 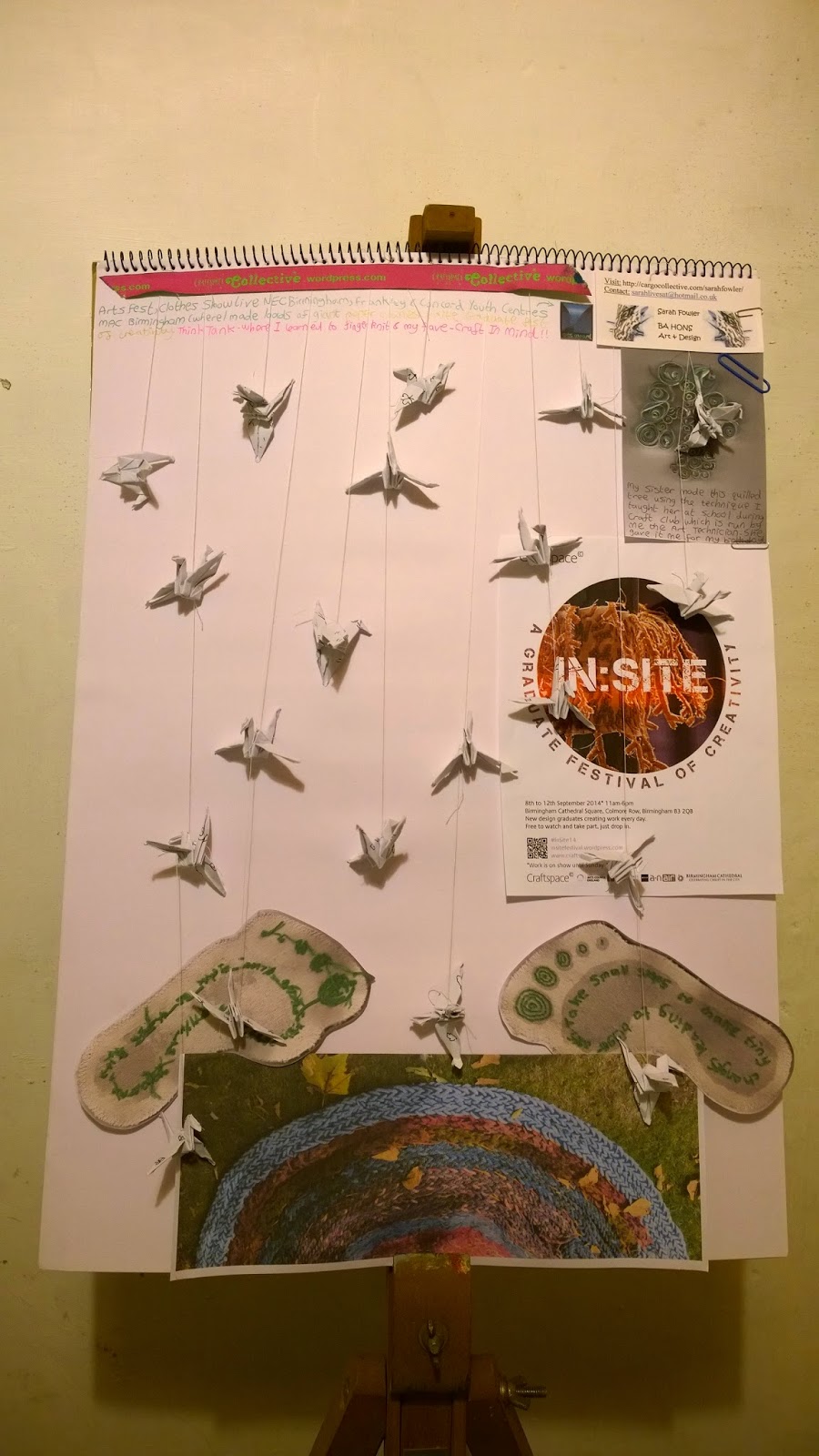 Tues 03/03/15
I couldn't include the Craftspace Collective without putting on the Cannon Hill Collective! Info to follow. 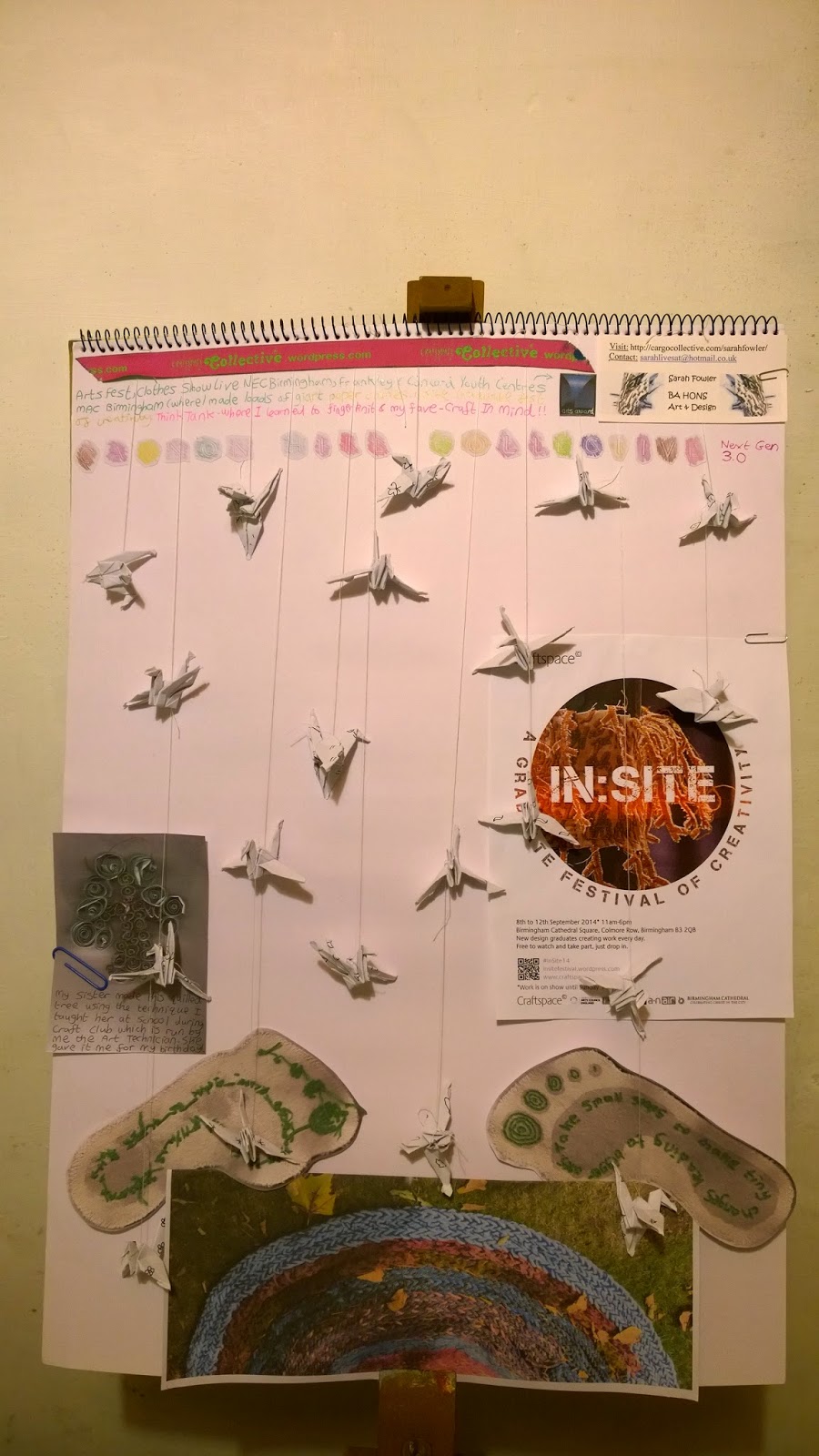 Weds 04/03/15 and Thurs 05/03/15
I have included this as two days because I ended up working on it until after midnight on the Wednesday and did rather alot! I added on my gemstone sea dragon (info to follow), finger knitting instructions, and wire tree on finger knitted shelf I've done very recently. Photo of me from my CHC video. 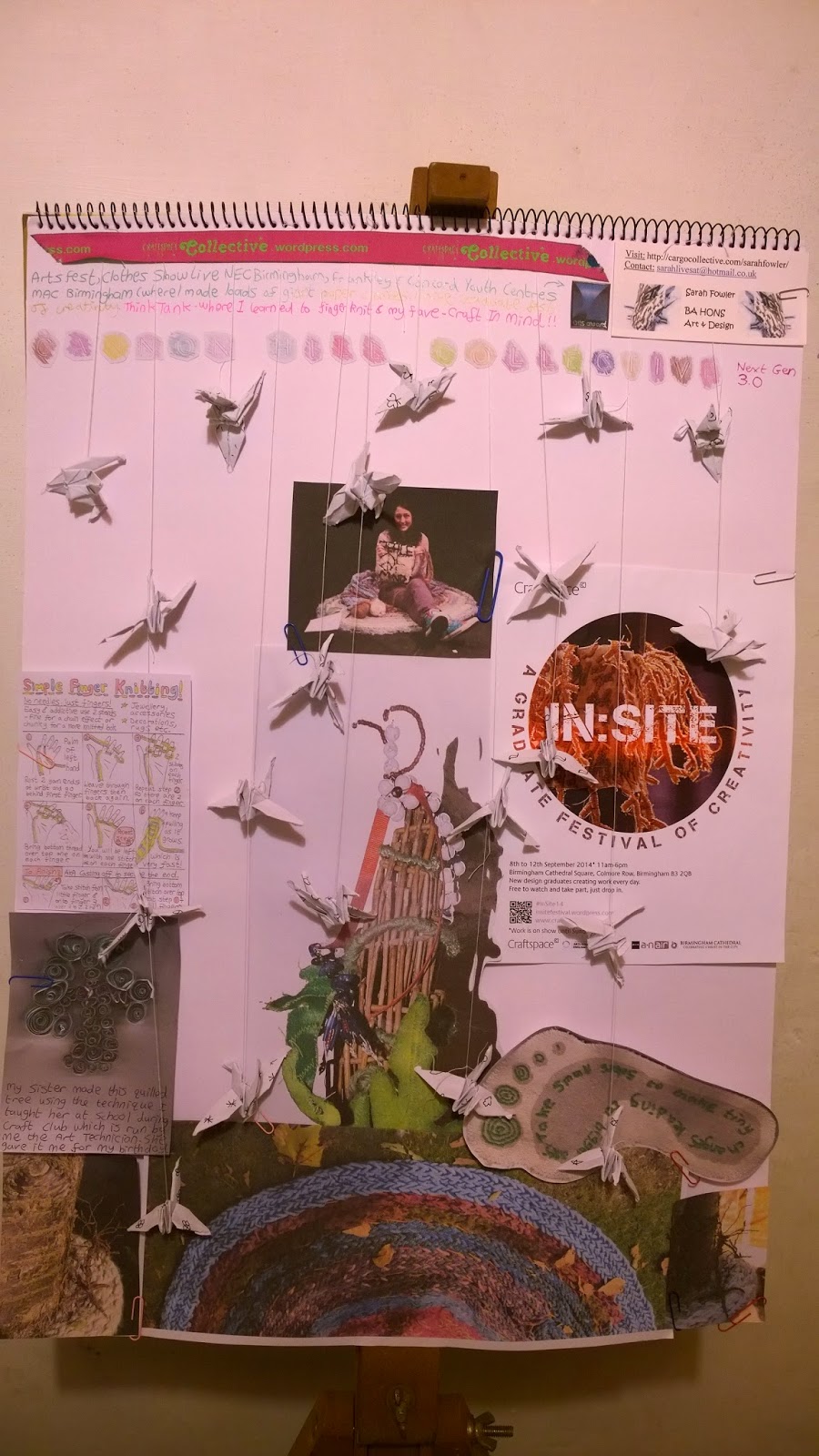 Fri 06/03/15
I added on a pinwheel brooch. I made a lot of pinwheels on my foundation course, got a distinction and inspired other students (hearts to follow hopefully). I even saw spinning pinwheel Art at the V & A. 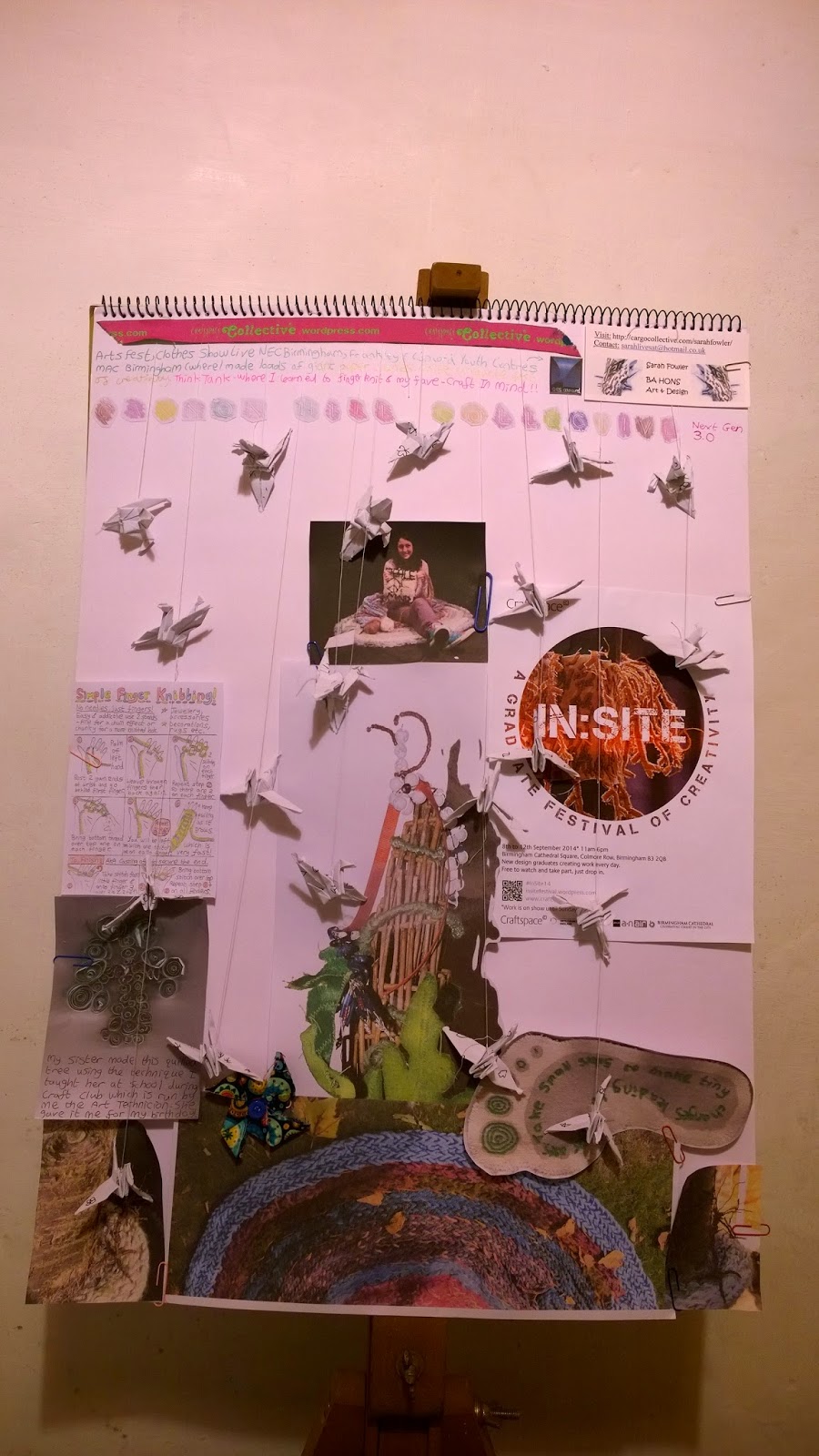 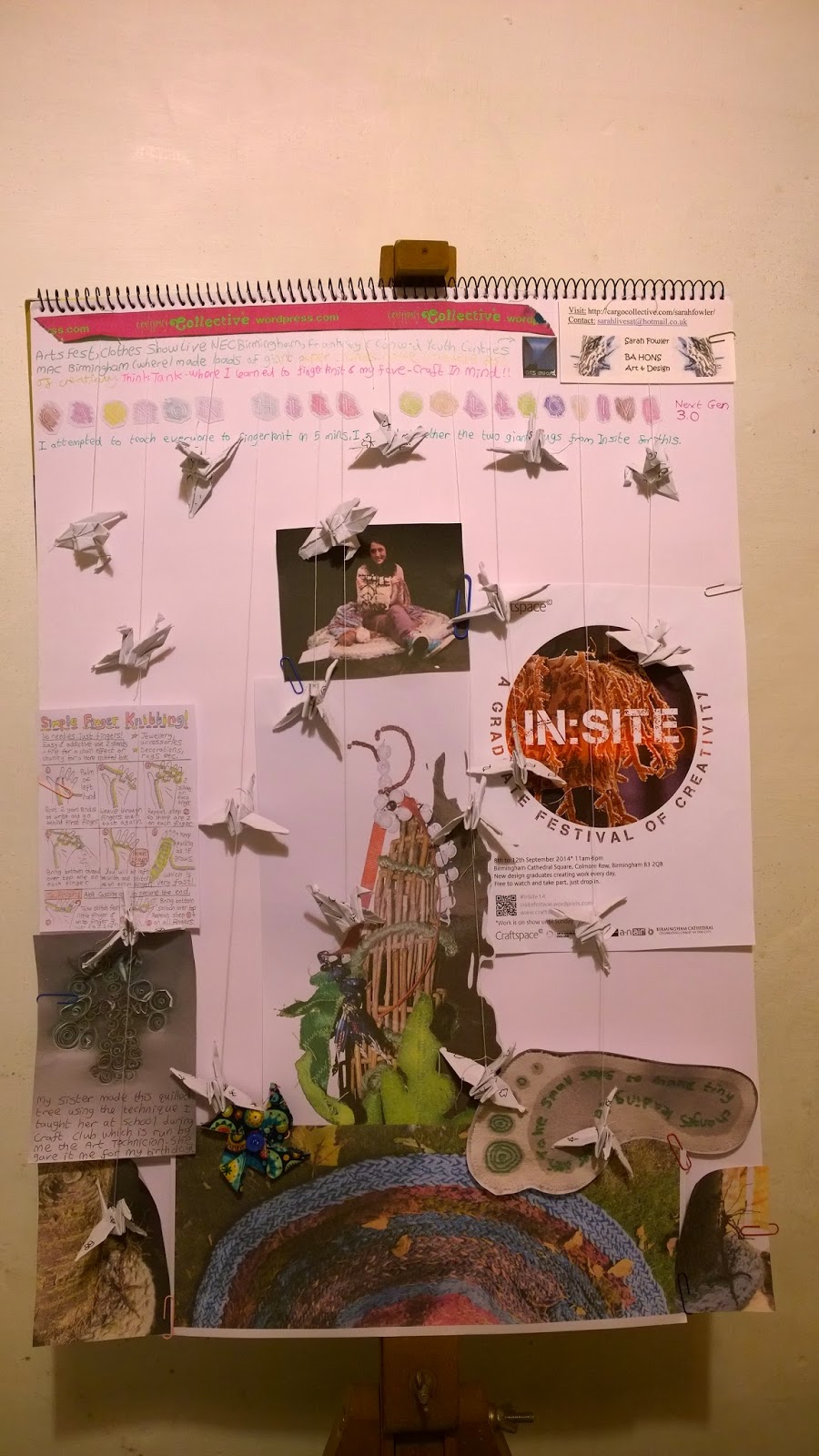 Sun 08/03/15
I've added on the resin hearts I made from foundation. I'm particularly proud because I remember the tutor telling another student what I did and saying it was a good idea standing the bugle beads up in the resin and asked me how I did it. They featured my final piece on their website as a thumbnail. 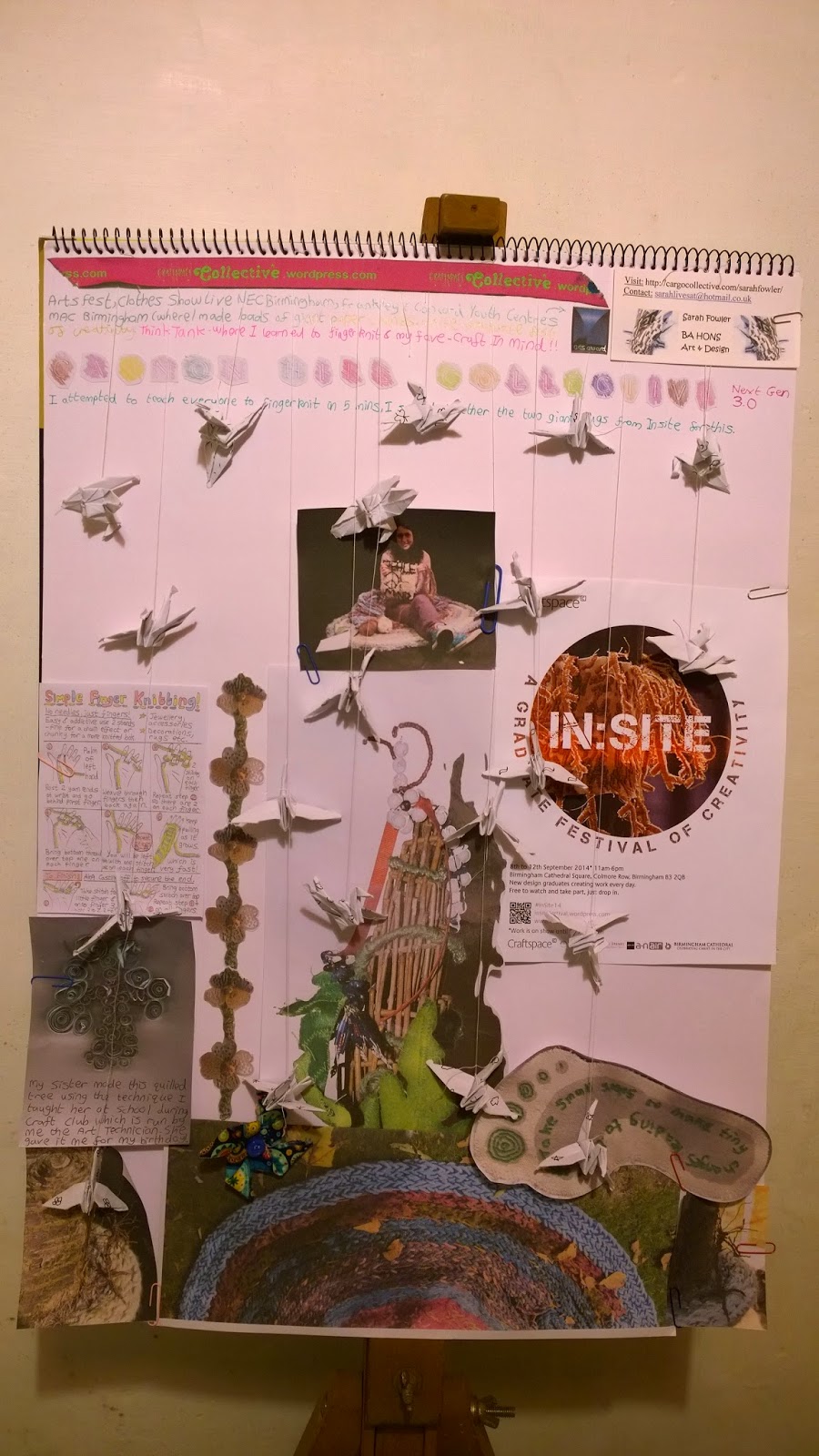 Mon 09/03/15
I added on the paper woven placemats for when I showed another CHC member how to weave. I added on a peacock feather from an A-level project which I scored 88/90 for probably my highest scoring Art project ever. But a peacock seemed appropriate for a montage of things I'm proud of. I have only glued on some things, mostly paper clips just incase I need to move things slightly, will glue once complete with no room left. Only two spaces left with a week to go! 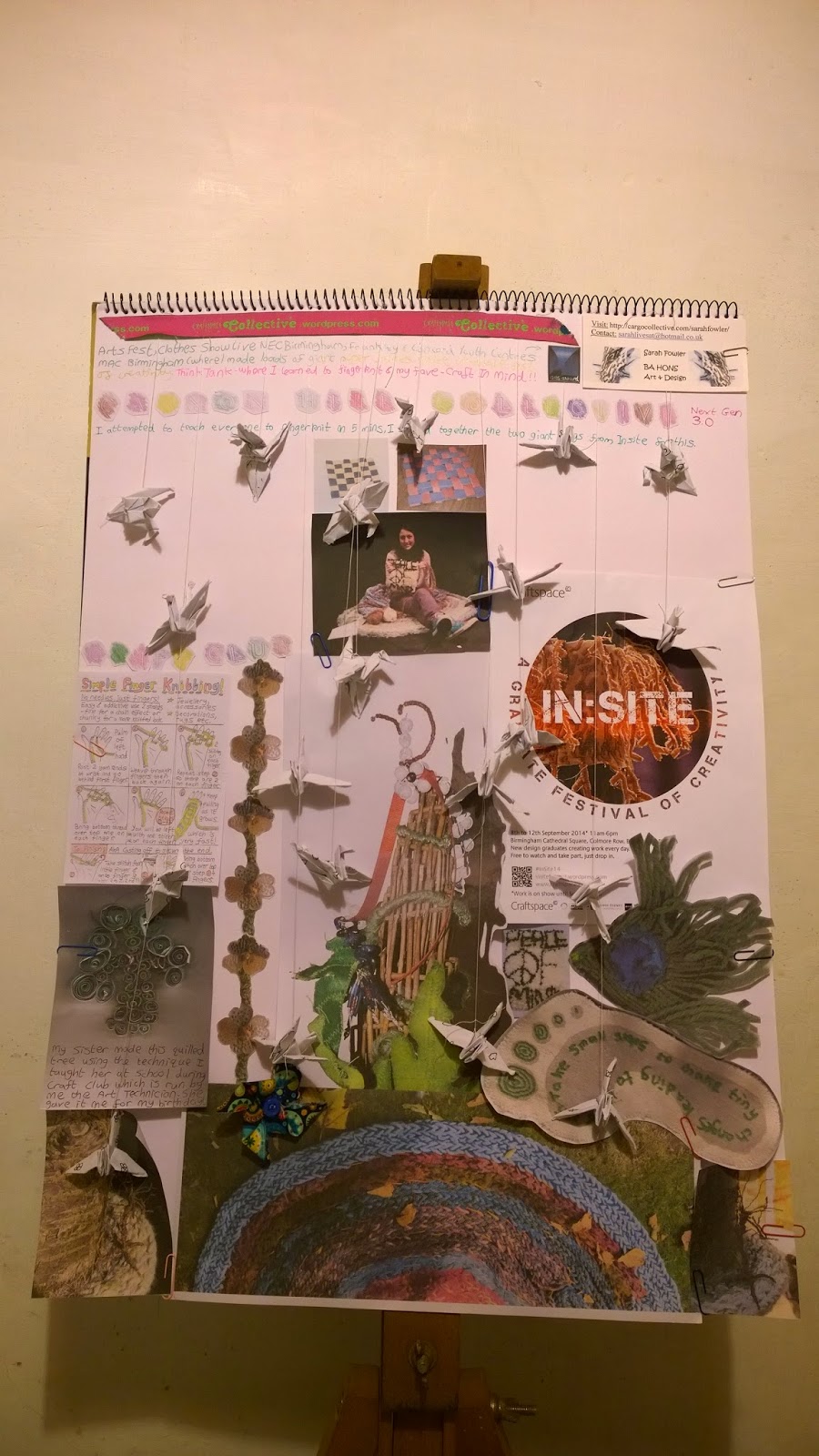 Tues 10/03/15
I wanted to include the notes on why I included the dragon which involved my late Nan, especially after having a dream about her the night before. Let's just say she had a huge image on my Craft work. 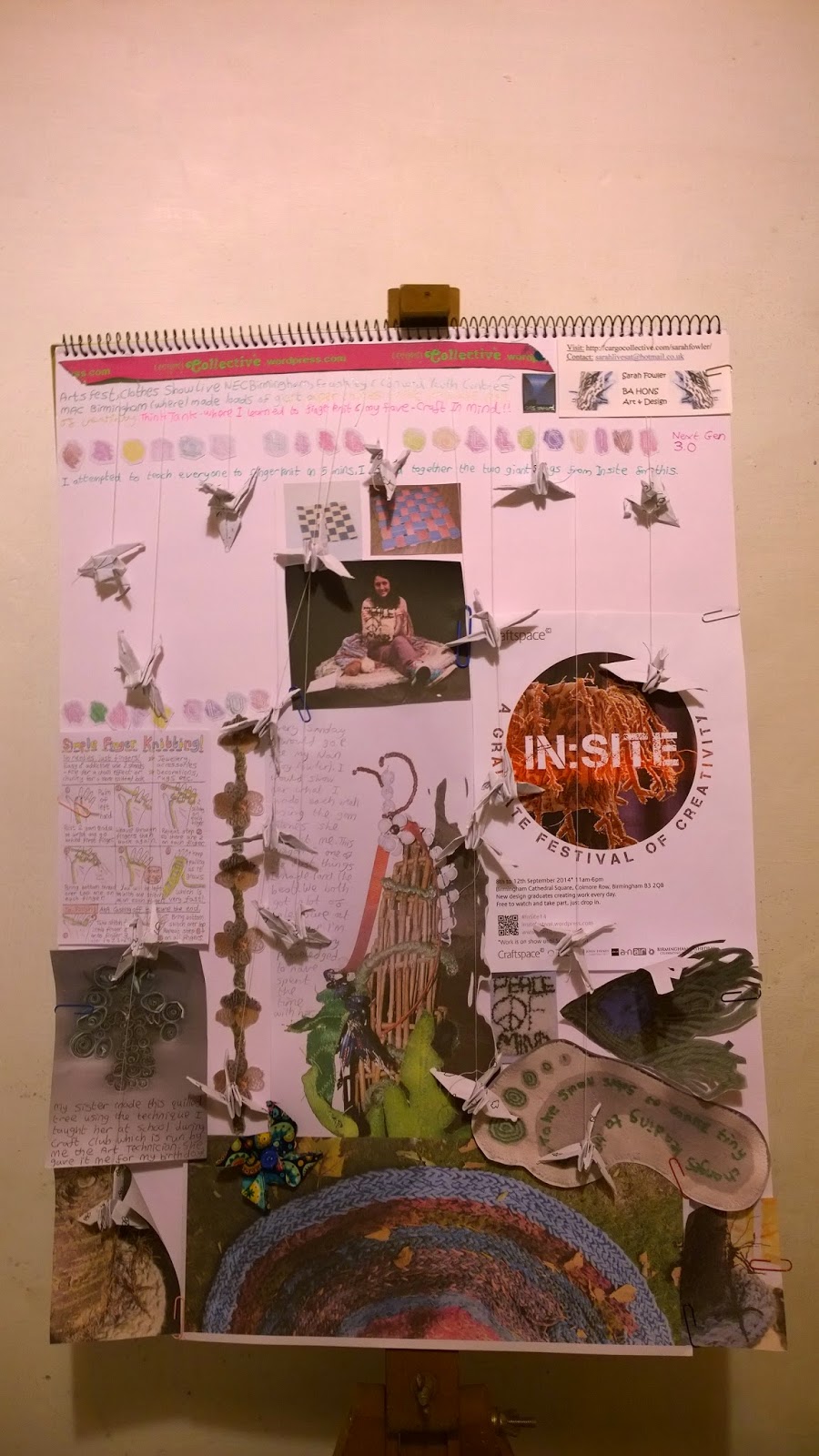 Weds 11/03/15
I realised that the best thing I made in my Ceramics class at the MAC was also the first. The glaze came out really dark which showed up the design well. It also had a smooth, shiny finish. The design harks backs to The Ring of Oaks- my longest running project from my degree. I even used the resin cast from my jewellery class to get the texture onto the clay. I have always been interested in creating cross discipline work and there was many a time when Art Technicians told me it wouldn't work and I proved them wrong! 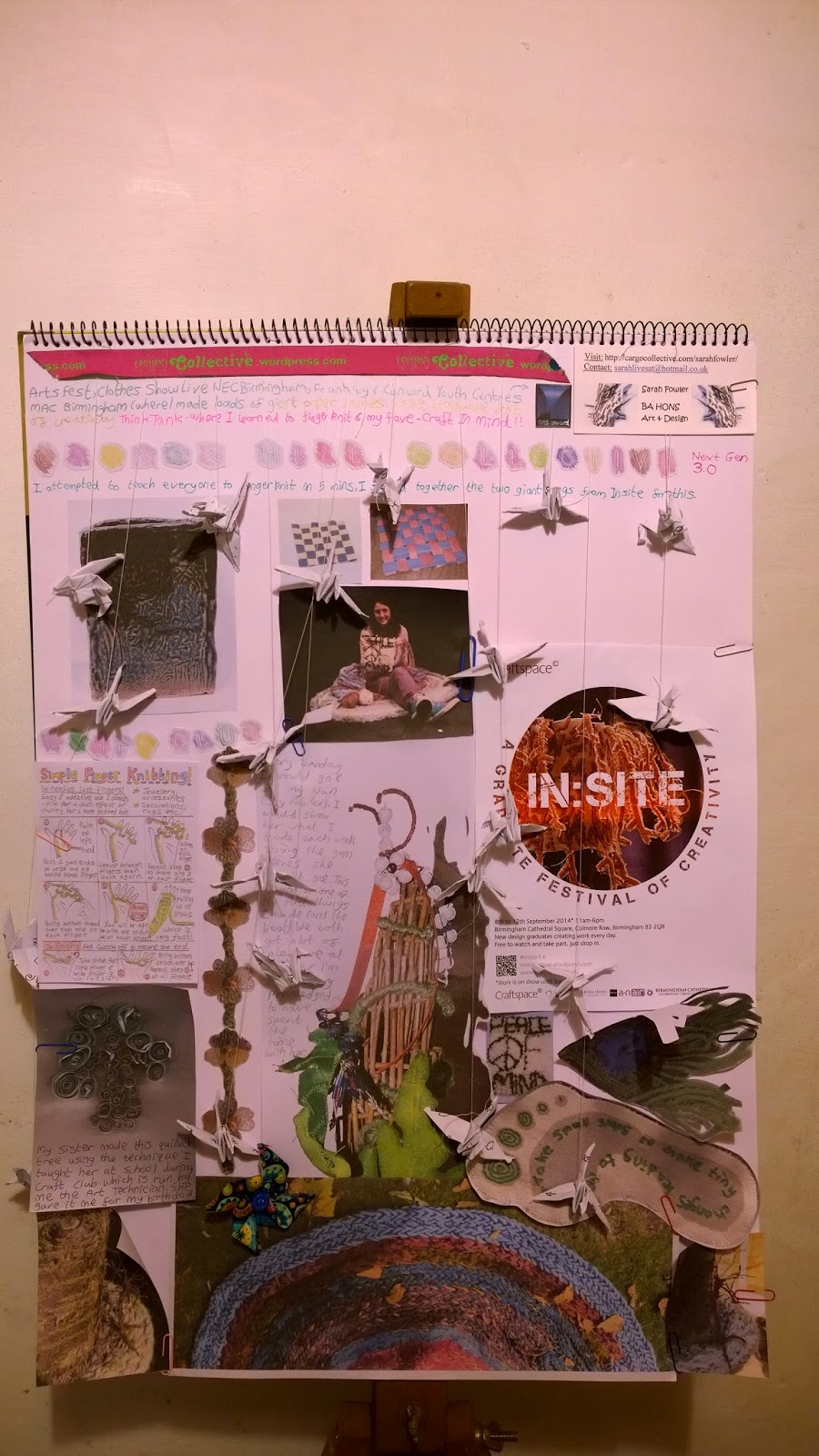 Thurs 12/03/15
I trimmed off the white at the bottom which caused my montage to slip down appropriate as I had two really bad days at work. Added on my logo I did for an IdeasTap brief for IdeasTap, appropriate as they are closing down. I didn't win the brief so use it on my own website instead. I drew it by hand then on the computer and it includes a combination of Art, Craft, Nature and Performance. This is what my practice is currently actually! 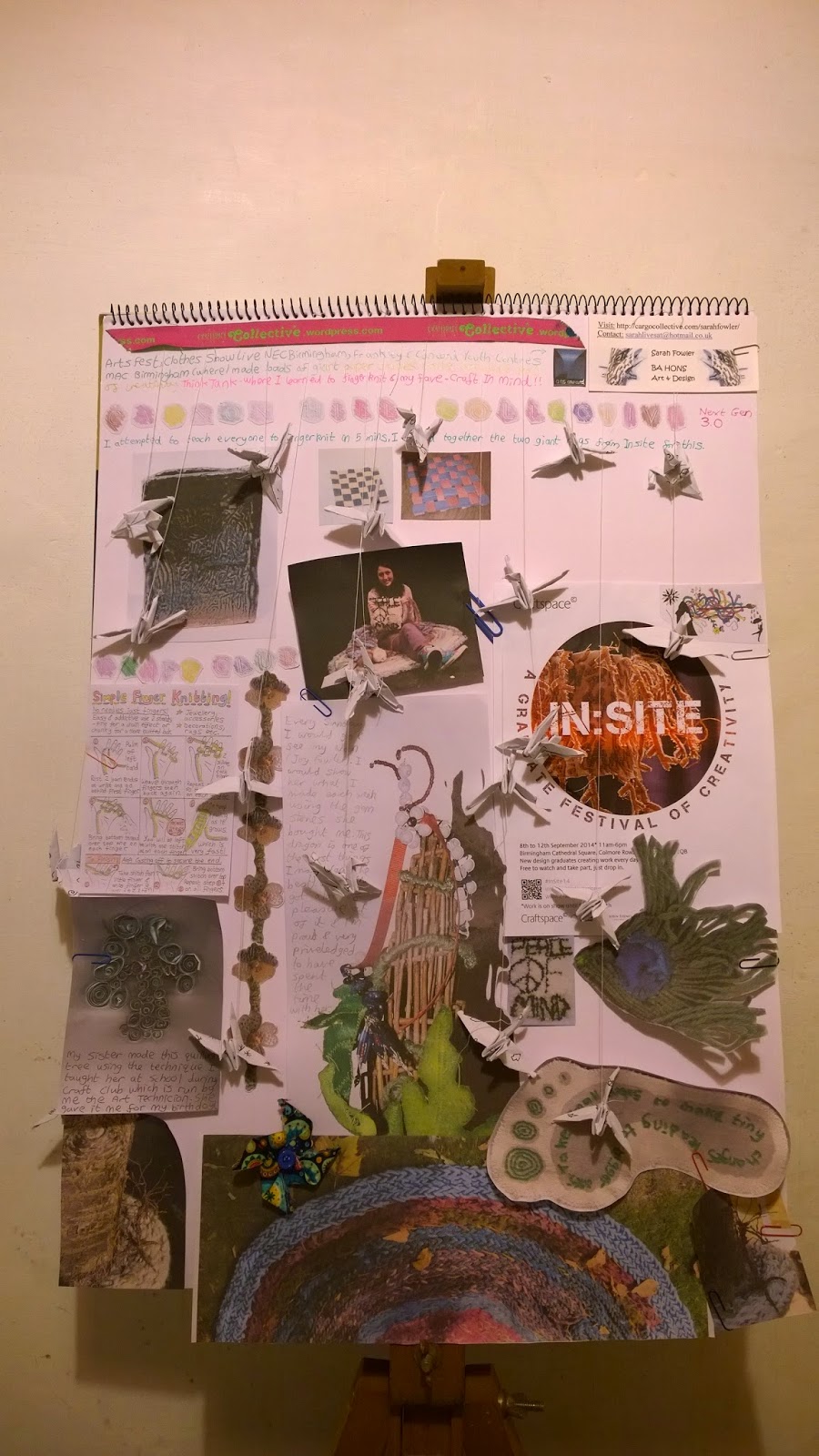 You can see it better on my website: http://cargocollective.com/sarahfowler/

Fri 13/03/15
I glued everything on properly and added on my acorn resin cast from my MAC course their resin is nice not being so clear and picks out the details well. 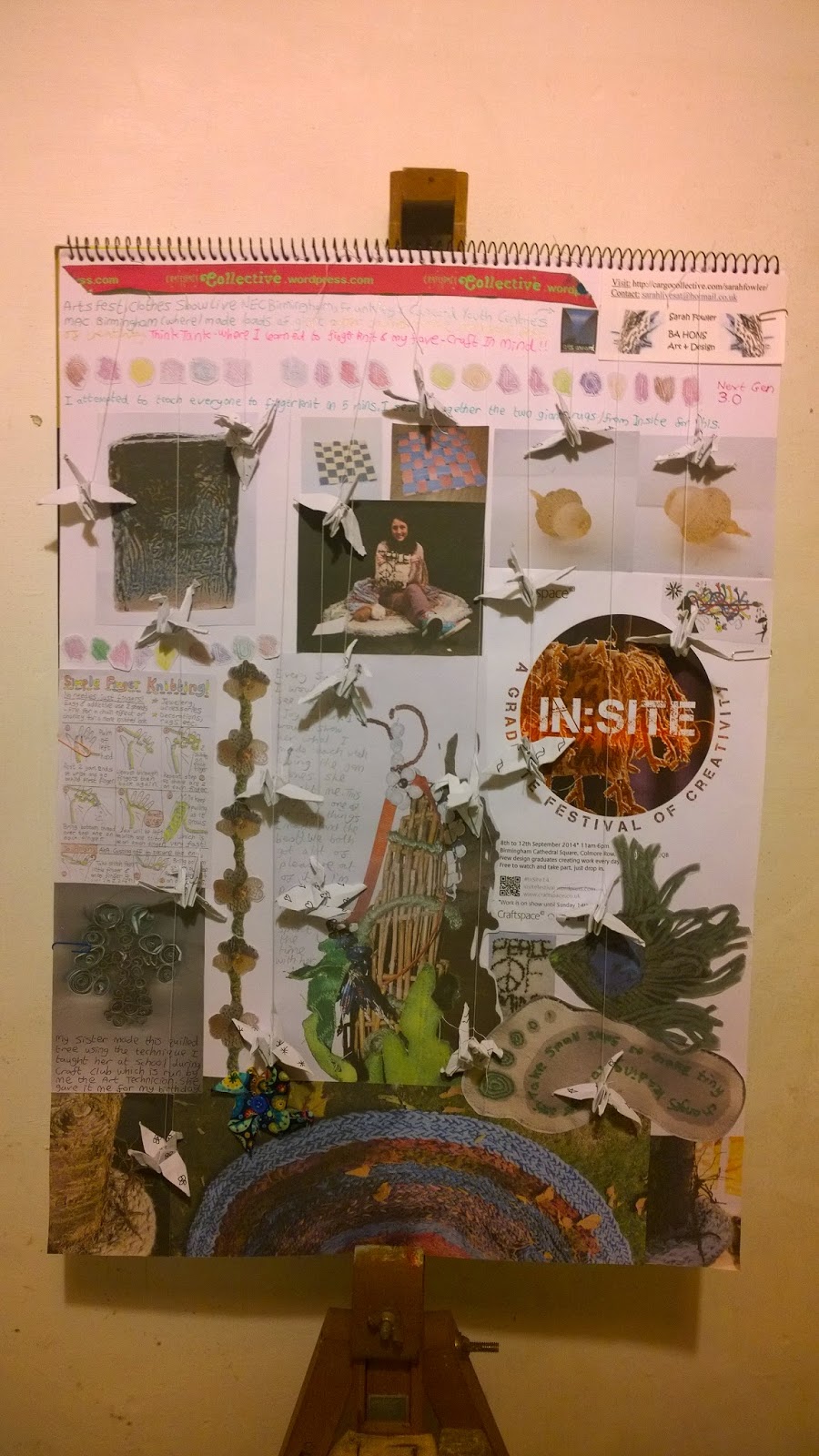 Sat 14/03/15
I wrote on the Insite poster explaining it and filling the last gap. 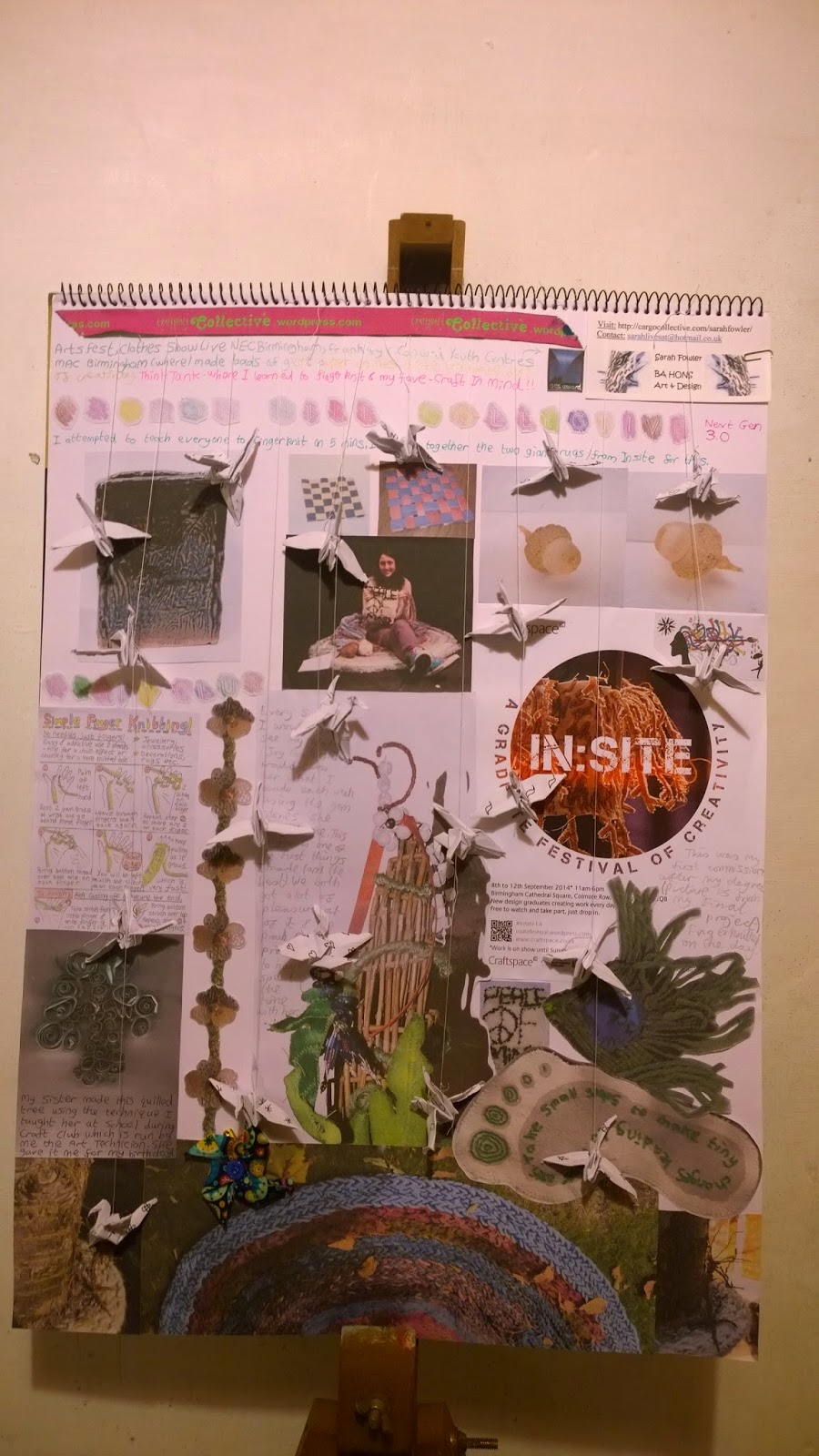 Posted by Sarah Fowler at 07:49 No comments: